In September 2021, President Joe Biden ordered the Occupational Safety and Health Administration (OSHA) to implement regulations for businesses with over 100 employees to mandate COVID-19 vaccinations for their employees.

On November 3, 2021, OSHA release these guidelines in a 490-page emergency temporary standard (ETS). https://public-inspection.federalregister.gov/2021-23643.pdf. In short, the rules will require workers to receive either two doses of the Pfizer or Moderna vaccines or one dose of the Johnson & Johnson vaccine by January 4, 2022 or be tested weekly and wear face coverings at work. Employees who test positive must be removed from the workplace.

The mandate will apply to about 84 million workers at medium and large businesses. While the rule currently covers employers with 100 or more employees, OSHA left open the possibility of expanding the requirement to smaller businesses and asked for public comment on whether employers with fewer than 100 employees could handle vaccination or testing programs.

END_OF_DOCUMENT_TOKEN_TO_BE_REPLACED

One of the most difficult things about being laid off is the loss of medical benefits. Unemployment covers wages, but the cost to continue medical benefits can be thousands of dollars a month.

Under the recently passed American Rescue Plan Act (ARPA), 100% of premiums for COBRA or state continuation coverage must be paid by the employer beginning April 1, 2021. The benefit will last for six months maximum and has a retroactive back to before the COVID-19 outbreak began. Depending upon the employer location, if it is state continuation vs. COBRA then the retroactive period may be greater. However, at a minimum, it is an 18-month look-back, i.e. November 2019.

This new law also applies to employees who lose medical benefits when hours are reduced from full-time to part-time. Employees who did not initially elect COBRA or health continuation also get a “second bite at the apple” and can claim this new benefit.

END_OF_DOCUMENT_TOKEN_TO_BE_REPLACED

Different political views are routinely communicated in news outlets. Our country is extremely polarized. Not only do strangers openly proclaim their differing views, but families, friends, and co-workers often vocalize vastly different political ideologies and opinions. What happens when an employee expresses political views that are not consistent with the employer’s views?

Unfortunately, an employee may not always anticipate the outcome of a planned political event. An employee may set out to attend a political rally or march on the individual’s day off. Much to the person’s surprise, the rally attracts dissenters, and the event spirals out-of-control. Tempers flare and the political rally rapidly grows highly contentious. Protesters become violent. Before the event concludes, the employee is photographed breaking the windows of a car. The individual is tagged on social media, and the employee has public settings on the account making the picture visible to all. Is this activity protected?

END_OF_DOCUMENT_TOKEN_TO_BE_REPLACED

California has begun distribution of COVID-19 vaccines in accordance with a phased administration plan. The next to be vaccinated will be individuals who are high-risk, unable to work at home, live or work in geographic areas that have been highly impacted or are most likely to spread disease to other workers or to the public.

The state has estimated that COVID-19 vaccines will be available to the general public in Spring 2021. Therefore, the time is quickly approaching for employers to make important decisions regarding the administration of the vaccine to employees.

Can employers require the COVID-19 vaccine?

END_OF_DOCUMENT_TOKEN_TO_BE_REPLACED

This week, the Southern California Employment Law Blog interviewed Todd Martin, a Senior Human Resources Generalist for Amazon, who also has experience working for small businesses as a human resource (“HR”) specialist. He is an expert in his field and a ​SHRM Certified Professional (SHRM-CP). Mr. Martin was willing to provide insights on his strategies for managing the human element of business.

Why did you to decide to pursue a career in human resources?

I fell into HR. I graduated college with a business degree in 2008, at the height of the recession.  I couldn’t get a job and took a temp position as a recruiter for a sales company.  From there I started learning more about the HR role and, after 5 years of recruiting and onboarding, decided I wanted to do more with HR. I love the feeling of helping people and finding solutions to problems, which is a lot of what HR is and does. There is a joy in being a support for both the company I work for and its employees.

END_OF_DOCUMENT_TOKEN_TO_BE_REPLACED

There have been many recent news stories about people losing their jobs due to taking a political stance or being involved in protests. A former employee of Taco Bell claims he was terminated for wearing a Black Lives Matter mask at work. On the other side, a journalist was terminated by the Washington Examiner after a video went viral showing that she faked helping a local business board up windows.

This has raised the question – Can an employee be terminated for political speech or lawful activity outside of work?

END_OF_DOCUMENT_TOKEN_TO_BE_REPLACED

When Thomas Jefferson commissioned an expedition to explore the western frontier in 1803, he called upon two men who, among other things, were valiant record-keepers. Meriwether Lewis, a secretary, and William Clark, a cartographer, spent three years exploring and documenting an unknown territory. Some of the most important things to come from the Lewis and Clark Expedition were their personal journals, which contained invaluable information used by those who followed their trail westward. 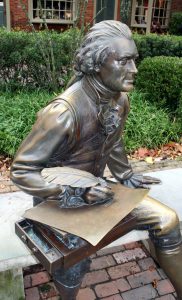 The value of record-keeping cannot be overstated. Advanced civilizations require written language, arts, sciences and government – which all begin with record-keeping. The same can be said about business. While all businesses keep records, there is a significant difference between a cave painting and the Great Library of Alexandria. Unfortunately, some business owners remain in the stone age of record-keeping, which can create significant liability.

Both Federal and State law require employers to create and maintain employment records. This includes payroll records, employee’s name, address, occupation, hours worked each day and week, wages paid and date of payment, amounts earned as straight-time pay and overtime, and deductions. These records must be maintained for three years. [Lab.C. §§ 226(a), 1174(d), 29 CFR § 516.5]. Other records, such as time and earning cards and work schedules must be kept for two years. [29 CFR § 516.6].

END_OF_DOCUMENT_TOKEN_TO_BE_REPLACED

The Family and Medical Leave Act (FMLA) is a federal law that provides job security to an employee who is absent from work because of the employee’s own serious health condition or to care for specified family members with serious health conditions, as well as for the birth of a child and to care for a newborn child, or because of the placement for adoption or foster care of a child with the employee. 29 USC § 2601 et seq.

The California Family Rights Act (CFRA) is the California equivalent of FMLA and provides similar protections. Gov.C. § 12900 et seq. Under FMLA and CFRA, both the mother and father are entitled to leave to bond with the newborn even if the newborn does not have a serious health condition. See 29 CFR § 825.120(a)(2).

The New Parent Leave Act (NPLA), which became effective on January 1, 2018, applies to smaller employers with 20-49 employees. (FMLA and CFRA cover 50 or more employees). Gov. C. § 12945.6. The NPLA requires employers with at least 20 employees to provide up to 12 workweeks of parental leave for eligible employees to bond with a new child within one year of the child’s birth, adoption or foster care placement.